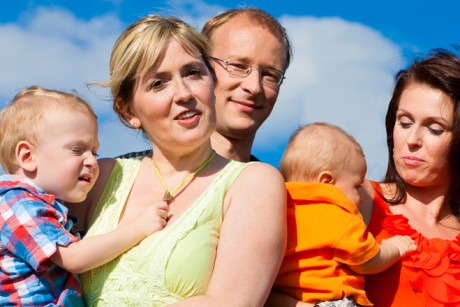 Human Fertilization and Embryology Authority(HFEA) has given the green Signals to the clinics and Interested parents can take approval .Now the IVF clinics can begin applying for licences in United Kindom.

Newcastle University, which pioneered the technique said it would be submitting its application for a in licence.

The fertility watchdogs(HFEA) has given final approval to the IVF clinics in Britain to create three parents babies.

Now the fertility techniques ,developed by British Scientist ,allowing doctors to replace an egg’s defective mitochondrial DNA with healthy DNA from a female donor to prevent the disease or conditions known as muscular dystrophy. It is such a controversial and crucial case as the baby born must be having DNA of three people ,in lay man language we can say ,child of one father and two mother .in our society many a woman are suffering from the sorrow of still births ,or some severe problems like heart attack ,whole in their hearts ,this technology is boon for them  and created a new hope for them .

Mitochondrial disorders can be very serious,by using this progressive approach victim couple can go for Designer Baby.Three Parent Baby technique is ray of hope for them .

“This is wonderful news for families who have, in some cases, waited years or even generations for the chance of having a healthy baby,” said Prof Frances Flinter, Consultant of and Professor in Clinical Genetics at Guy’s and St Thomas’ NHS Foundation Trust.

How it works –TPB technique The nucleus of an egg from a donor female was removed leaving an egg with healthy female DNA. The nucleus of the mother was then inserted  into the second egg and fertilized with the sperm of the father. The egg was then placed in the womb of the mother.

Concern is still there,because “The technique is experimental and caution for  waiting to see if the boy stays free of disease in view of the risk of the diseased mitochondria inevitably carried over from the birth mother multiplying in the cells of the supposedly healthy child.  the Human Fertilisation and Embryology Authority (HFEA) today said the procedure

could go ahead ,as we have done all the screening and find its beneficial for babies and human kind .

Its not  mention in Today’s announcement , whether this application technique will only apply to male children or  If girls are born the risk of transmission of the disease to future generations still remains a real possibility. Parents  using the procedure need to

The world’s first child created using the “three-parent baby” technique was born in Mexico September last year. Abrahim ,First TPB  was conceived in Mexico with the help of American doctors,as per  Mexico’s lax fertility laws. The procedure is not legal in the United States.) According to The Telegraph, the child was born to a couple from Jordan who had been trying to have children for nearly 20 years.

There is one more story about the Three parent baby ,in1997 the first successful baby was born using this technique (Emma Ott) Maureen Ott, a mechanical engineer living in Pittsburgh,. In 2001, Cohen and others reported that 10 single babies, twins, and a quadruplet at his New Jersey clinic and a further six children in Israel had been born .

The UK is the first country to legalise the procedure

The baby’s parents are from Jordan and the work was carried out by a team of experts from the US know about  risks as well the potential for success. Dr Zhang told the New Scientist that, as the technique has not yet been approved in the US, the team went to Mexico where “there are no rules”.

“To save lives is the ethical thing to do,” he added.

“The UK leads the world in the development of new medical technologies. This decision demonstrates that, thanks to organisations like the HFEA, we also lead the world in our ability to have a rigorous public debate around their adoption.”

Who can have the Priviledge to have Three parent baby

woman are suffering from the sorrow of still births ,or some severe problems like heart attack ,hole in their hearts etc

The couple decided to have a three-parent baby for a serious medical reasons: The baby’s mom carries genes for Leigh syndrome, a fatal disorder that impacts the developing nervous system and caused the death of their first two children. The baby was conceived using an egg with nuclear DNA (DNA from inside the nucleus of a cell) from his mother and father, and mitochondrial DNA (which provides energy for cells) from an anonymous female donor.

According to the New Scientist, doctors removed the nucleus from one of the mother’s eggs and inserted it into a donor egg that had had its own nucleus removed. The egg was then fertilized with the father’s sperm.

Last year the UK became the first country to legalise mitochondrial replacement therapy (MRT), as the technique is known.

As per survey Report

Approximately one in 200 children are born with faulty genes in their mitochondria, small structures inside cells that generate energy.

Just 0.1(approx) per cent of a person’s DNA is held in the mitochondria. It is always inherited from the mother and has no influence over individual characteristics such as appearance and personality

Adverse effects of this technique

Unknown epigenetic effects – environmental influences that alters,how  genes works – may also have serious consequences for the health of babies, considerable.

Result is still awaited .As any technology has its Pros and Cons .In three parent baby we have to keep our eye open,what will be the  side effect of using this technology .

Dr David King, director of the secular pro-choice watchdog group, Human Genetics Alert, said: “This decision, to approve experiments on babies, using this dangerous and medically unnecessary technology risks all our children’s futures.  It opens the door to designer babies

As IVF clinics has started applying for licence we can expect First Legal TPB (three Parent Baby) most probably next Christmas 2017.As scientist ,they have hope to have babies of  150 women, by using TPB-IVF.